Highlights from the 2019 Lamont Open House

On Saturday, October 5, Columbia University’s Lamont-Doherty Earth Observatory opened its doors to the public once again. Open House is a tradition that dates all the way back to 1949, allowing scientists at Lamont to share their research with the rest of the world via interactive, hands-on demonstrations and engaging talks. This year’s Open House attracted more than 3,000 visitors and, just like research at Lamont, covered a vast range of subjects and regions, from under the sea to the surface of the moon. Below you can see a few examples of all the fun we had.

A carousel is a rotating set of images. Use the previous and next buttons to change the displayed slide 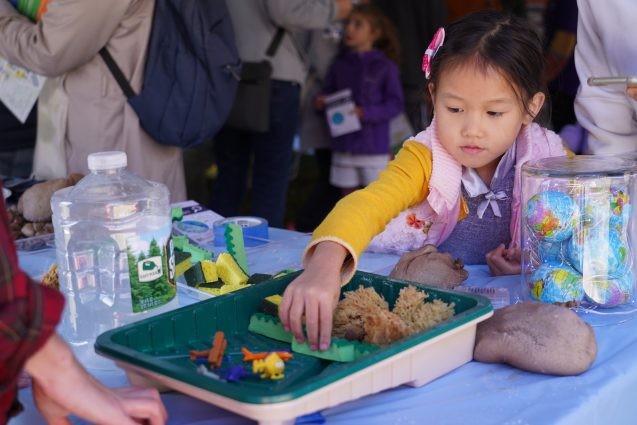 At this activity focused on the Jamaica Bay Wildlife Refuge, kids learn how wetlands and other natural obstacles can help prevent flooding and storm surges in coastal areas. Photo: Kyu Lee 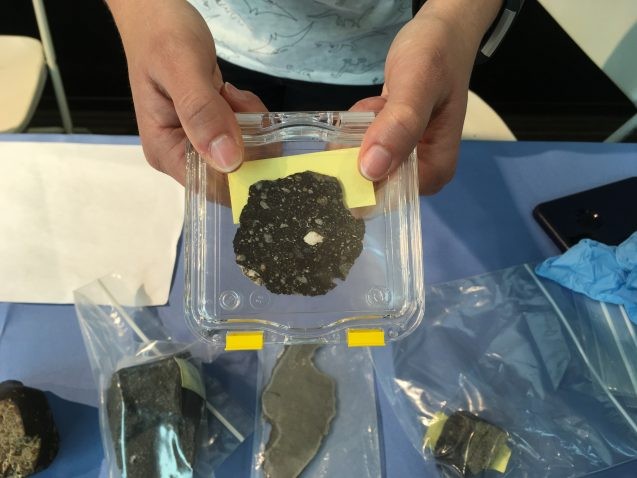 One exhibit let visitors touch rocks from outer space. Shown here is a slice of a meteorite that sprayed off of the moon during a collision and later landed on Earth. Photo: Sarah Fecht 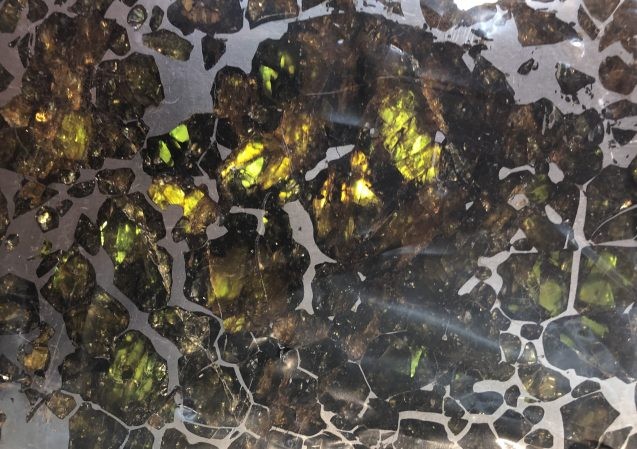 Closeup of a slice of meteorite. Made of pallasite and metal, this meteorite is believed to have come from the boundary between the core and mantle of a small planet. Photo: Phebe Pierson 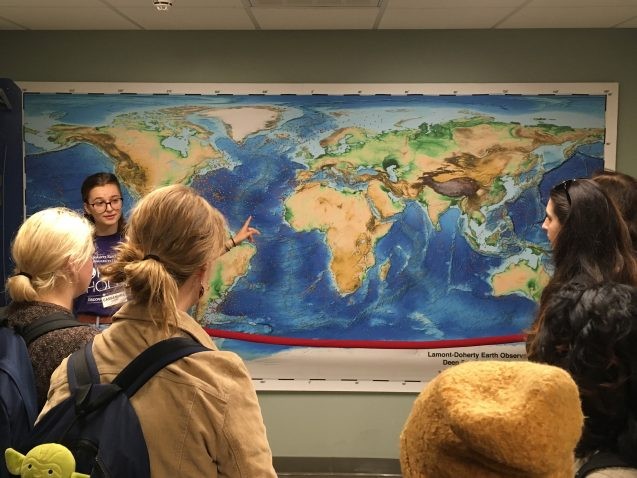 Lamont-Doherty’s Core Repository is one of the most extensive collections of deep sea sediment cores in the world. Here, a Barnard College undergraduate shows off a map of hundreds of sites where Lamont scientists have drilled into the seabed to collect the cores, which provide a window into past climate conditions. Photo: Sarah Fecht 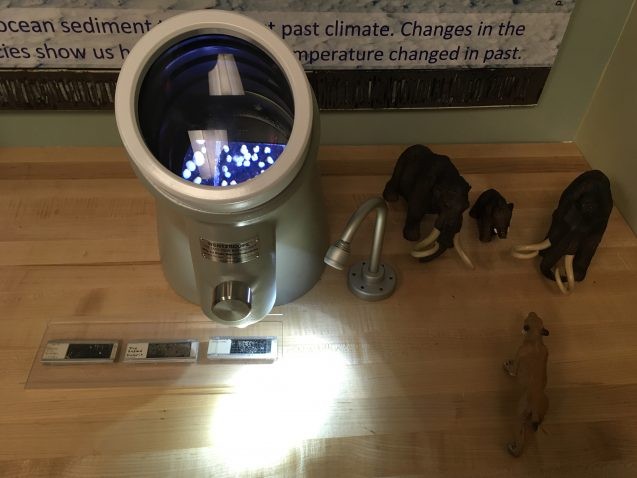 The tiny fossils under this microscope came from a deep sea sediment core. Their shells provide clues about the temperature, acidity, and CO2 conditions in the ocean millions of years ago. Photo: Sarah Fecht 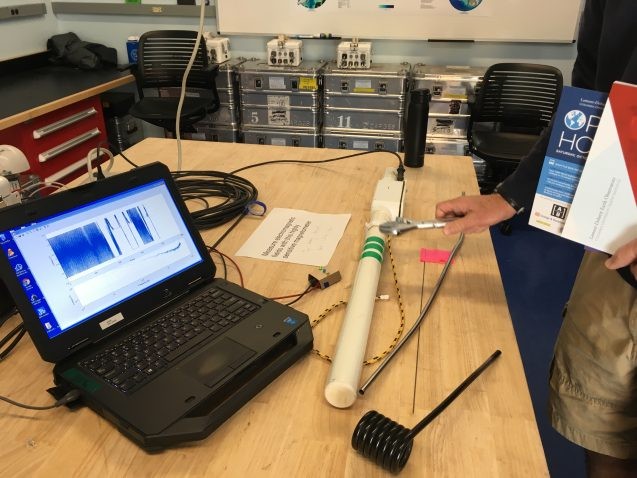 A visitor waves a wrench to disrupt the readings from a magnetometer, which researchers in Lamont’s Electromagnetic Geophysics Lab use to measure the electrical conductivity through the earth. This information, combined with magnetic field measurements, has helped the team to study water flow under the Antarctic ice sheet and to discover a freshwater aquifer under the sea. Photo: Sarah Fecht 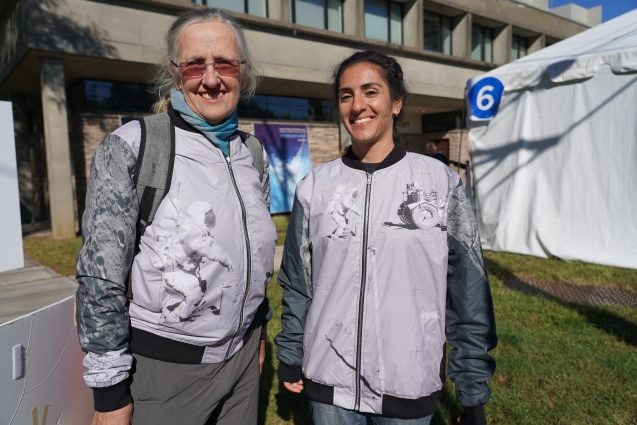 Geophysicist Robin Bell shows off a jacket she designed depicting a lunar landing and a gravimeter used to measure the moon’s gravity. Photo: Kyu Lee 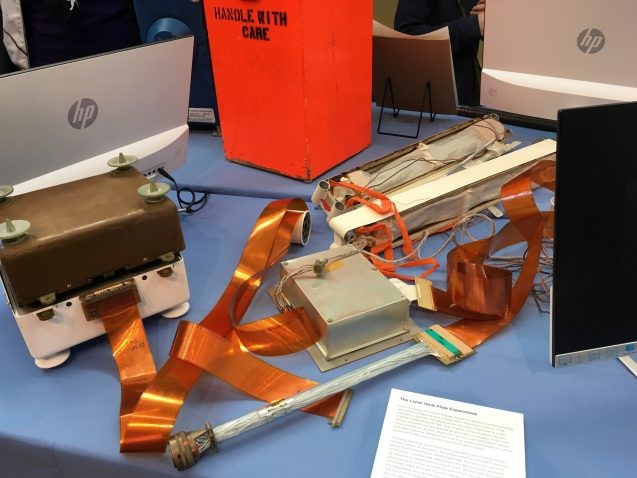 In July of 1971, Lamont’s lunar heat flow experiment landed on the moon with Apollo 15. Set up by astronauts on the moon’s surface, the experiment allowed scientists to measure how heat flows within the moon, in order to learn more about its geological history. The equipment remains on the moon to this day. Photo: Sarah Fecht 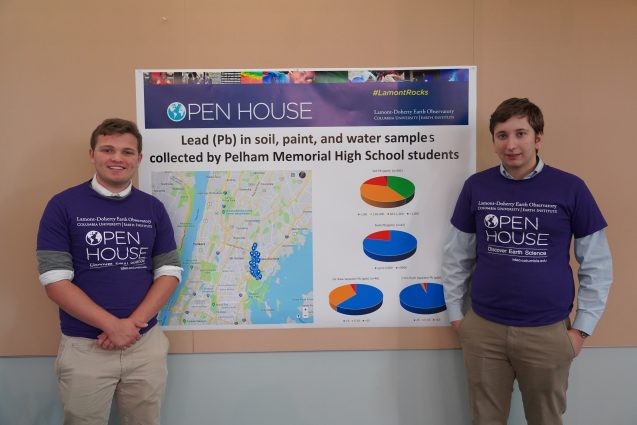 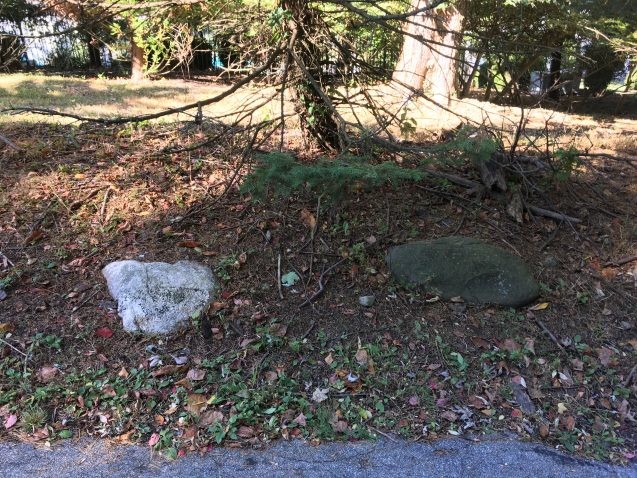 During the last ice age, about 18,000 years ago, New York was buried under a mile or so of ice. Lamont glacial geologist Mike Kaplan led a tour explaining how we can spot the traces left behind by the ice sheet as it retreated. One way is by looking for glacial erratics — rocks that don’t quite belong. Since the area around the campus is mostly made up of dark volcanic rocks, the white rock in this photo was likely carried into the area by the advancing ice sheet, and left behind as it retreated. Photo: Sar 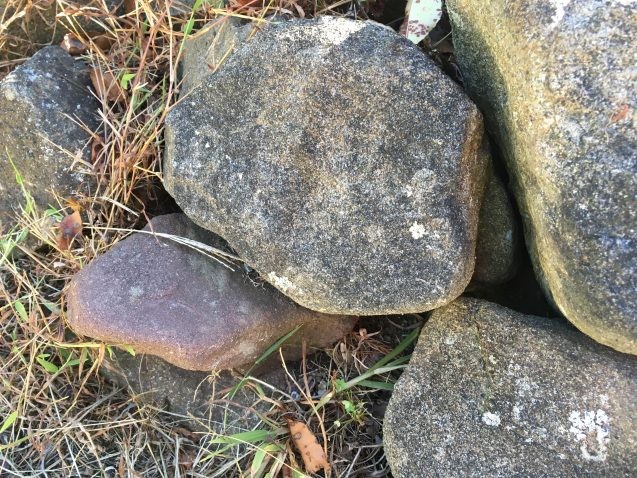 One of these rocks is not like the others. Can you spot the glacial erratic? Photo: Sarah Fecht 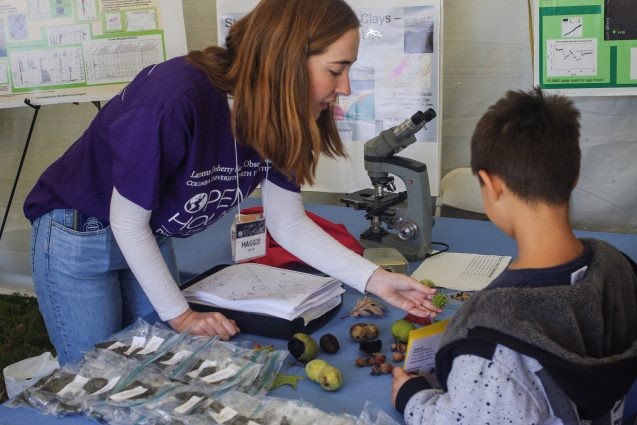 A volunteer in the Biology and Paleo Environment tent shows a future scientist samples of seeds and leaves from different kinds of plants found in bog environments. Photo: Phebe Pierson 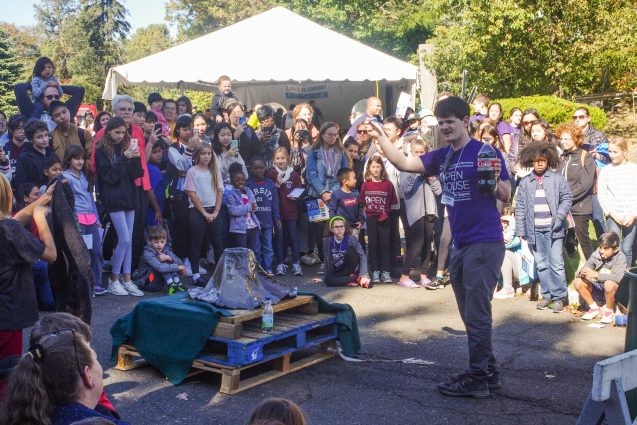 All types of eruptions at Volcano World during the Lamont-Doherty open house. #LamontRocks pic.twitter.com/npY9XEKDZJ

Lab-mate Kailani has a very captive audience for measuring temperature and salinity in our #HudsonRiver exhibit at the Open House. #LamontRocks
🌍🌊😀 pic.twitter.com/byb3FEnrZR

A carousel is a rotating set of images. Use the previous and next buttons to change the displayed slide 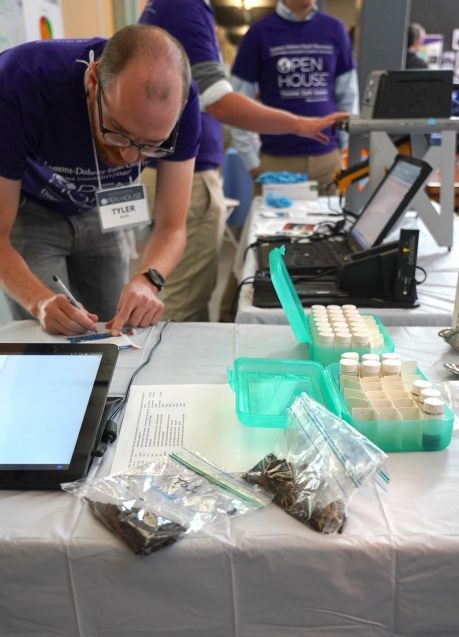 As part of a study on lead contamination in soils, researchers encouraged participants to bring samples from their backyard in ziplock bags to be tested on site. Levels could be determined in a few minutes. Photo: Kyu Lee 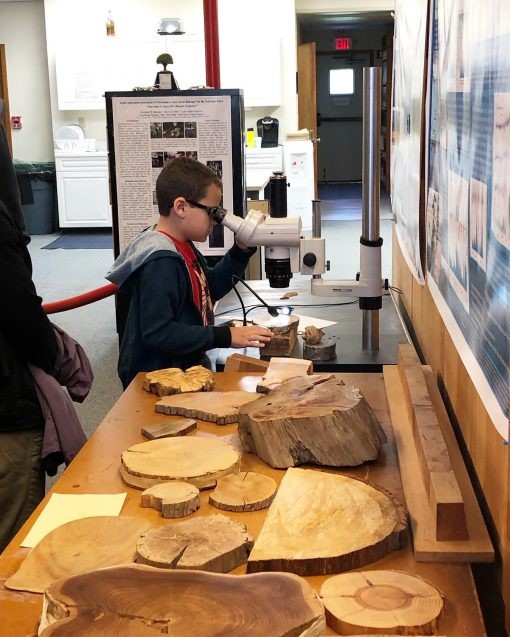 A young boy views tree rings up close under a microscope in the Tree-Ring Lab. Photo: Phebe Pierson 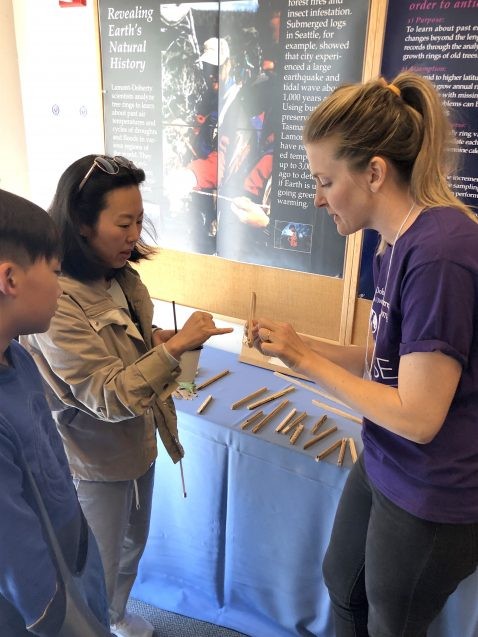 Visitors to the Tree-Ring Lab learned about how dendrochronology—the study of tree-rings—works. Scientists drill a small core from a tree’s trunk and use markers within the tree-rings to learn about the history and climate of the tree’s native area. Photo: Phebe Pierson 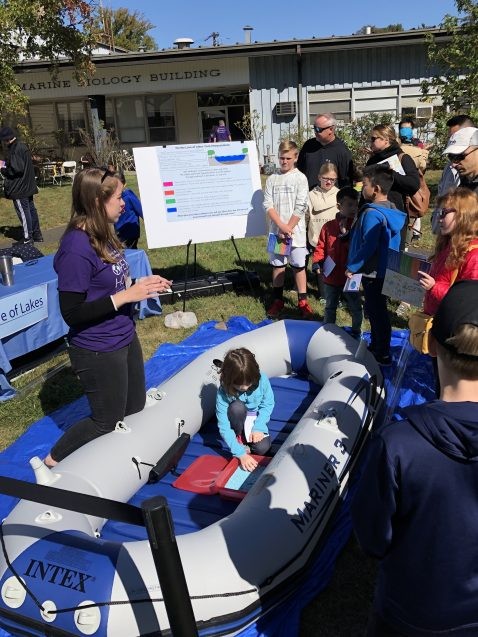 A scientist volunteer in the Biology and Paleo Environment exhibit shows visitors a raft similar to the ones they use when heading out to take core samples from the bottoms of lakes. Photo: Phebe Pierson 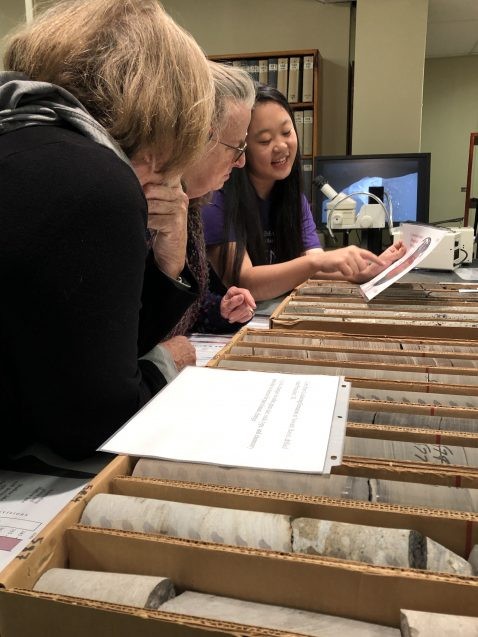 A version of this post originally appeared on the Earth Institute's State of the Planet blog.

Break Codes, Solve Puzzles and Learn About Science in This Interactive Game

Every year, Columbia University’s Lamont-Doherty Earth Observatory invites families and community members to visit the campus and learn about its research through fun hands-on activities and talks. Although Open House cannot happen in person this year, you can still explore Lamont and its history-making discoveries through a game that just launched today.

In this episode Marie DeNoia Aronsohn talks with Maureen Raymo, the interim director of the Lamont-Doherty Earth Observatory, on her vision for the institution, what the Columbia Climate School will look like and Lamont’s Open House. Yes, Lamont Open House at Home starts tomorrow and the next four days are your chance to to discover, learn and participate in science that helps us understand our planet earth.

Be sure to check out the full schedule of events, talks and activities here.

You can find Pod of the Planet wherever you listen to podcasts, on Apple iTunes, Spotify, Soundcloud, iHeartRadio and Stitcher.

Originally posted on State of the Planet.

Lamont-Doherty Earth Observatory, Columbia University’s world-renowned earth and climate science research campus, is coming home — to your home. This year, we’ll be bringing all the science fun and discovery of our annual Open House celebration right to your computer screen. The earth and climate science festival that traditionally takes place on one day at our campus in Palisades, New York, has turned into a four-day online assembly of exciting, insightful explorations of our home planet — all thoughtfully curated to expand minds and open hearts to the wonders of Lamont science.

Our Biggest, Best Event of the Year is Going Virtual

Highlights from the 2019 Lamont Open House

This year’s Open House attracted more than 3,000 visitors and, just like research at Lamont, covered a vast range of subjects and regions, from under the sea to the surface of the moon.